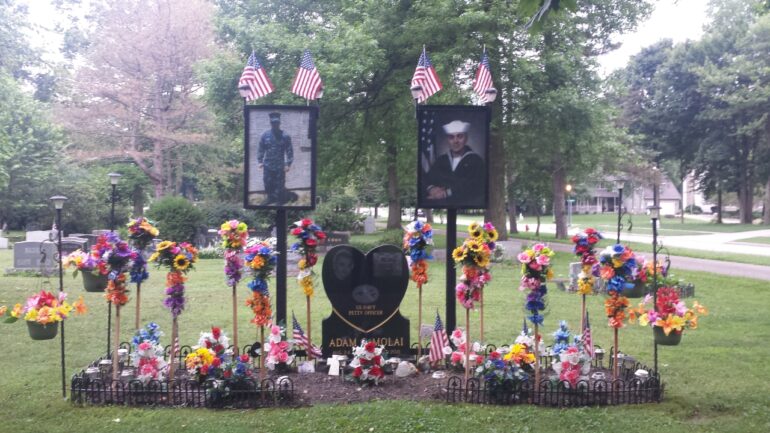 A before picture of Adam Molai's gravesite. Submitted photo

The 11th District Court of Appeals has upheld a judge’s decision to overturn a jury decision awarding Kent resident Fred Molai $750,000 for damages related to burial plots he purchased from Standing Rock Cemetery.

In a September 2021 verdict, the jury ordered the cemetery — via its administrators, the City of Kent and Franklin Township — to pay the sum for violating its contract with Molai by removing an arrangement of poles and posters around his son’s gravesite.

“It is a procedural matter that allows a judge to look at the verdict and facts and decide if the jury went astray at all,” said Kent Law Director Hope Jones, who has represented Standing Rock Cemetery throughout the proceedings. “In this case, the judge felt that the verdict was not based on the evidence presented at trial so he ordered a new trial.”

Molai objected to Enlow’s decision to grant a new trial, sending the case to the 11th District Court of Appeals. On Aug. 29, the appeals court sided with Enlow, letting the cemetery off the hook and leaving Molai no recourse except to pursue a second trial.

At issue are a dozen burial plots Molai purchased to memorialize his son Adam, who died in a boating accident in 2011. Molai decided to bury him at Standing Rock Cemetery and purchased 12 plots. He buried his son in one of the middle plots, and placed an array of ornaments and decorations on the remaining plots as a memorial to his son. The decorations included fencing, a flower garden, and a pole about six feet high supporting posters of his son.

In 2013, Standing Rock determined the posters violated cemetery rules and regulations, and requested that Molai remove the poles, posters, and flowers. Molai refused and sued Standing Rock to prevent them from removing the items without his consent.

The matter proceeded to Portage County Common Pleas Court, which ruled in 2017 in the cemetery’s favor. Molai, the court said, must remove the wooden poles and posters within 10 days, or cemetery workers would do it for him.

Molai retrieved them and had a company build a metal frame holding the posters bolted and welded onto Adam’s headstone. He was informed that Standing Rock would once again remove them, and he watched as cemetery workers did so.

His case in Portage County Common Pleas Court still pending, Molai pursued claims of intentional infliction of emotional distress, trespassing onto the burial plots to which he held legal title, and breach of contract for not selling him four adjoining plots to the 12 he already owned. Molai claimed he had reserved the plots and had attempted three times to put a deposit down on them.

In 2021, a Portage County Common Pleas Court jury found in favor of Molai for the breach of contract claim, awarding him $750,000 in damages. However, Molai did not prevail in the emotional distress and trespassing claims.

After Enlow reversed the verdict, Molai told the 11th District Court of Appeals that the trial court erred in finding in favor of Standing Rock on the emotional distress and trespassing claims and in granting Standing Rock’s request for a new trial. He also claimed the trial court erred in denying his motion for judicial recusal because Enlow had spoken with the jury after the trial.

What really happened, Jones said, is that after the verdict was read and Enlow was taking questions from the jury, one of the jurors mentioned that they had awarded attorney’s fees.

“Most judges do speak to the jury about procedural questions, but are not permitted to question the jury about why and how it came to its verdict,” Jones said. “In this case, he did not do that: The juror simply blurted out the statement.”

According to the Appellate Court record, Enlow testified that his discussion with the jurors about damages did not affect his ability to be fair and impartial.

The 11th District Court of Appeals ruled against Molai, saying he did not provide enough evidence to prove that Standing Rock’s actions caused him serious emotional distress. The appellate court also rejected Molai’s trespassing claim, saying the cemetery’s board of trustees was acting on a court order.

The appellate court also determined Enlow acted correctly in ordering a new trial to assess damages, reasoning as Enlow had that the $750,000 jury award was too much in light of the evidence presented. Finally, the appellate court found that Enlow did not need to recuse himself from ruling on Molai’s request for a new trial on damages.

“At this point there is nothing for Molai to get,” Jones said. “The $750,000 has been overturned, so we will need to either settle the case or have another trial on the breach of contract issue only.”

Upset, Molai said people do not know that a judge can overturn a jury verdict. He berated Enlow, insisting that the judge blocked the request for emotional distress because he knew it meant money.

Molai said he intends to pursue a breach of contract claim against Standing Rock, which declined to sell him the four additional plots and footers for the stones that would be placed on them. One of the four plots, Molai said, was to be his own final resting place.

Molai attempted to buy the plots and footers while his first lawsuit against the cemetery was in process. According to appellate court documents, the cemetery’s board of trustees reasoned that they were already in litigation with Molai and did not wish to conduct further business with him.

“It is not just about my four plots,” Molai said. “They have destroyed my family plan. I got papers that say they were on hold for me. I went to pay three times, and they wouldn’t take my money.”

Molai reiterated his belief that emotional distress is the crux of his complaint against Standing Rock.

“If this case is not emotional distress, you tell me what is,” he asked. “Nine years of my life here. Instead of going to grieve in peace here, I’ve been tangled up with these guys in court, and it’s still going on. Nine years is a long time.”

No matter who the judge presiding over the next court proceeding is, it won’t be Enlow, Molai insisted.

“We will block Judge Enlow. He will not preside over my next case. We will not let that happen,” Molai said.

But Ravenna attorney Doug Kehres, who has been representing Molai, said it is entirely possible that Enlow could preside over the next trial. Plaintiffs do not get to decide who their judge will be, Kehres said. He confirmed that Molai will sue for breach of contract and “any damages that can go along with it.”

Clearly displeased with Enlow’s role and an appellate court which he said may not have even looked at the evidence, Kehres said, “my client is very disappointed that his right to a jury trial just got nullified.”